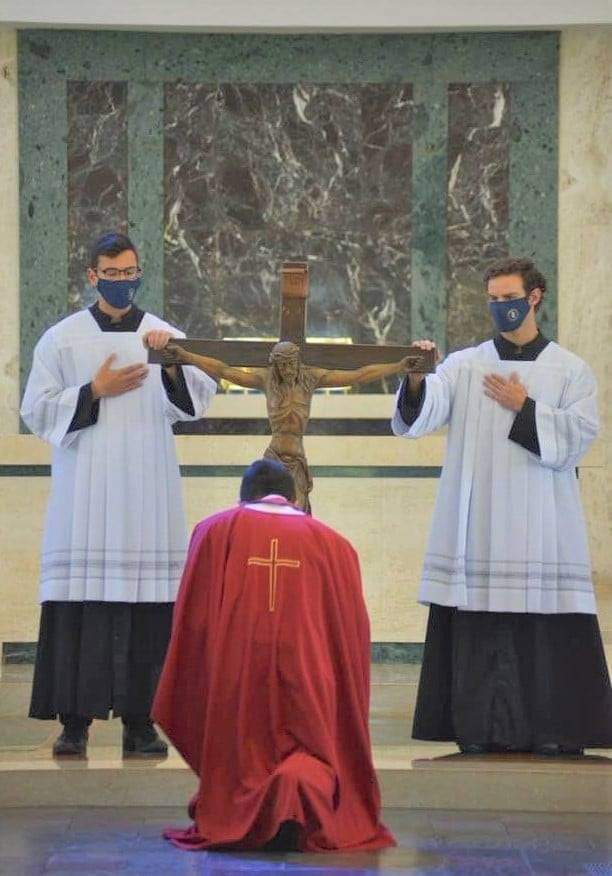 Allow me to share with you some thoughts on our calling as ministers and messengers of the Gospel. I chose to become a priest because I wanted to live a life that would bring me closer to God and to people, and I believed that that life was one lived in simplicity, faithfulness, and brotherhood with everyone. As a young boy I also did think of being something else: a lawyer or a doctor perhaps. I did, after all, have the intelligence and commitment to be whatever I wanted to be. But I decided I wanted a simpler life, a kinder, gentler life that would bring me peace and communion with God and my neighbor. And so I chose the seminary over the university, and put my whole being into responding to God’s invitation. San Carlos was my home for five years before I left and ‘complicated’ my life with the study of philosophy and theology.

When our formators sent me to study in Louvain, I found myself both excited and anxious. I was excited because I knew I was looking forward to more adventures, and anxious, because I thought that leaving for further studies would move me farther away from the simple and ideal life I had so earnestly wanted for myself. The thing is, by the time I was in fourth year philosophy, much of my earlier interest in living a simple life had slowly ebbed away. There’s a lot of unnecessary power-play in the church; and one of the things I had to recognize quickly and guard against, even in seminary, was the fact that power, prestige, and authority are sometimes too attractive to pass by.

I still remember some of my contemporaries who even as seminarians would talk about wanting to become monsignors or bishops one day, of holding such and such position in the church, or of being assigned to this or that parish because it was big and so on. I remember one guy who spent most of our class hours doodling miters and crosiers and drawing episcopal coats of arms. Granted these are the products of still-childish minds which have not yet fully grasped the enormity of responsibility in the church—much like James and John perhaps, wanting to sit at Jesus’ right and left—still, we would be hard pressed to deny that such actions and others similar to them, speak of a manner by which some students, as early as seminary, regard ministry in the church. It is, for some, a means of upward mobility.

Even then, I used to constantly remind myself that if that were what I really wanted, if power, authority, wealth, and fame, were what I earnestly desired, I should leave the seminary and choose a profession in which my ambition would not be hindered at all by any admonition to “carry no extra shirt, no belt, no purse”. It just seemed hypocritical to profess that one were following Christ’s command to live in simplicity and trust in God’s providence when one’s life was lived in pursuit of their very antitheses.

But I cannot deny that when I left for further studies, at the back of my mind was that nagging thought that here was an opportunity for me to add a feather to my cap, a few more letters after my name, a couple of degrees to be proud of and show off—perhaps to make me feel that I was better than most. Was my going abroad going to be my ticket to upward mobility in the church? Back in 1992, at least, it was a question that seemed to get an affirmative answer.

The surprising thing, of course, is that instead of turning out to be that way, my six years away from home turned out to be an unusual ‘purification’ of sorts. For it was at the university in Belgium that I met truly great and noble people, mostly professors, theologians, philosophers, who have spent their lives in utter anonymity, and yet whose works influence the very thought, not only of the church, but of society as well. And yet these were men and women who willingly shunned the spotlight, who refused to make their lives the focus of attention, and who chose to efface themselves and “decrease, so that [Christ alone] might increase”. They were human beings who, in my mind, were of exceptional character and nobility; and they formed and solidified the core of how I have come to define myself and my ministry.

In grade school and high school, with the Franciscan Capuchins who educated me, I grew up singing the prayer, “Make me an instrument of your peace”. An “instrument”—it was an idea that embedded itself so deeply in my young mind. I am an instrument, nothing more, but nothing less either. For in my very being one, I share in the work of Christ who is in the end, the sole point and reference of everything I am and do. A poet once said that all we really do in this life is “contribute one verse to the everlasting poem written by the hand of God himself”. One verse—just one—but a verse nevertheless; as such, no less important than the entire poem, for without it, the poem would hardly be complete.

This is why even as a seminary student like yourself, I promised myself one thing—and it’s a promise I hope I can keep for as long as I live, and that is to remain as far away as I can from the trappings of power, wealth, prestige, and honor that so profoundly characterize many, even in the church. But that’s me; it doesn’t make me any better than anyone. Just different perhaps.

The Franciscan priests who taught and molded me in my early years, drilled into my consciousness the value of a simple and carefree life that was the inspiration of one of the greatest and most noble human beings who has ever lived, Francis of Assisi. It is strange—though not completely incomprehensible—that at this particular juncture in my life, the inspiration that first brought me to seriously consider becoming a priest, has found itself enkindled once again. I say it is strange because I never imagined that living and working with seminary students would become for me an almost daily reminder of the anonymity of the life of a disciple, the hiddenness of the life of one who seeks to be no more than the moon to Christ who must always be the sun.

This is also why I kept telling you while we were together, that only Christ deserves to have a ‘fan club’. People will naturally find us ‘attractive’ in many different ways. Many priests and seminarians after all are kind, gentle, and caring. Many of us are good speakers, and not a few are actually good looking. People like those qualities. The thing is, while there’s nothing wrong in receiving their praise and admiration (and we should learn to say “thank you” sincerely, by the way, whenever we are appreciated), we also shouldn’t forget that those words of praise do not primarily belong to us. They are first and foremost directed to Christ, not to ourselves. Granted that doesn’t always happen, it still doesn’t change the equation.

They’re Jesus’ fans, not ours. And we shouldn’t be going around trying to form our own groupies. One who does so completely misses the point of the whole situation. We are meant to be ‘attractive’ to people, that is true. Adrian Van Kaam the author of “Religion and Personality” suggests that there’s absolutely nothing wrong with being “a little vain”, meaning keeping oneself well kempt so as not to turn people off. But neither should we forget that looking good, speaking and acting well, are not meant to draw people to ourselves. That will naturally happen. What we’re really supposed to do is to lead them—when they do come to us—to Christ. He is the chief shepherd, remember. We aren’t the point. He is.

(Published in Ferdinand Santos, Journey into the Heart of Christ: Letters to Seminary Students on Faith, Life and Formation, Claretian Publications, 2003)

IS VIRGIN MARY NOT THE MOTHER OF ALL CHRISTIANS?

IF YOU MUST LIVE, GIVE