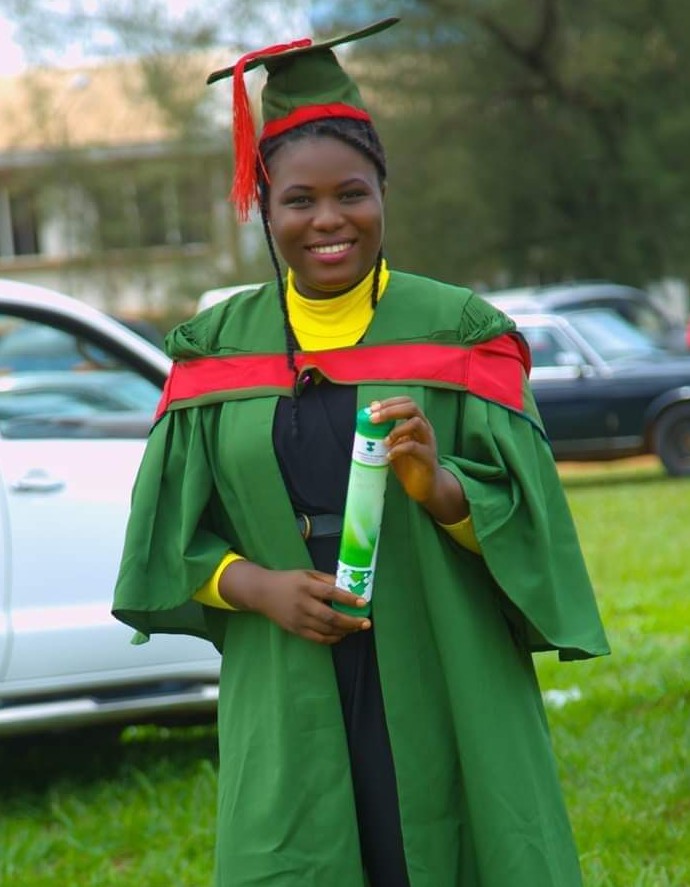 I met Sarah last month as I was reviewing CVs to hire an Assistant. Her first-class degree in French got my attention, and the way she executed the first trial task was impressive. I hired her and relocated her to Abuja. The following week she flew with me to Yola, her first time, and has made my life easy so far. Her ability to learn and curiosity are two qualities I find exciting. Her story, which I read for the first time this evening, is an exciting example of determination, focus and commitment. Read and be inspired.

At 18, all mum wanted for me was marriage. We argued a number of times and I was labelled a rebellious child because I wanted to get a degree before marriage. Mum would wake me up every 2 a.m. to remind me of how poor they are and how they can’t afford me a university education, and the option left for me was marriage. I stood my ground, bought a Diploma form in 2011 without their knowledge.

Alas! The forewarned unpleasant reality of not having the wherewithal for my university education dawned on me in 2011 when UNN offered me admission to read Linguistics. All my parents could raise for me was 12K. One can imagine 12k for a whole semester. Thank God for my elder sister who came to my rescue. And reacting to my elder sister’s assistance, my elder brother said to my face and I quote “I still don’t understand why our elder sister is wasting money to send you to school. Money they could use to support our younger brother’s dream of travelling abroad. Reason being that most graduates hardly get good jobs. Every other person was against my decision to get educated except my elder sister.

Notwithstanding the hitches and struggles, I was awarded a diploma in 2013 with DISTINCTION. Sadly, my parents didn’t appreciate my effort because they aren’t literate enough to understand what it means and takes to graduate with distinction. I kept my cool hoping to be celebrated by my second family in Aba because they are graduates. So I broke the news with excitement expecting congratulatory gestures from them, but all they could do was to undermine the feat with comments such as “You made it because of the leniency of UNN Aba campus lecturers. Do you think you can make first class in UNN Nsukka campus?” I felt very bad.

Not satisfied with a diploma cert, I decided to work in order to save money for degree. The highest paying job I could get with my certificate then was 12K monthly. My little earning and fresh memory of the challenges I faced doing diploma almost made me give up on pursuing a degree. With mixed feeling, I decided to try marriage but the relationship failed in 2015 because of genotype. I was so hurt and heartbroken that I decided not to get into another relationship. In fact, I cancelled marriage from mind. Same year, I got a job that paid better and I was able to save a little. But I was still troubled. Degree I no get, marriage I no get and I was 24.
Fast forward to December, 31st 2015, I left the family prayer meeting to go pray in seclusion. I told God: “I am done making decisions for myself. I won’t even plan for 2016 because all my plans in the previous years failed. I leave myself in your hands. Any direction your wind blows me to, I will follow. I am done struggling for a better life.” I wailed, groaned. I let out the entire burden in my heart for a fresh year. I decided I was not going to interfere in my own life affair because things obviously weren’t going as I planned.
Into the quarter of the year, I started having a strong urge to go back to school. To make matter worse, people began sending me job openings for graduates and/or asking me if I was done with my Degree, and those who knew I didn’t have a degree kept pushing me to go back to school.

While in the kitchen one evening with my elder sister, these words fell out of my mouth: “Aunty, I am going back to school.” Then a huge silence crawled into the kitchen. Everything in the kitchen paused for about a minute except for the sound produced by the boiling pot of soup. My sister smiled at me and said: “Sarah I don’t want to start what I cannot finish.” That was expected because “I am going back to school, literally means “Get ready to spend money. She was my only pillar of material support in everything.” I asked her to promise me that she will take care of my school fee while I take care of every other thing. She asked me how. I told her about the plan to WORK and STUDY. She was very skeptical about it and expressed concern about my overall wellbeing at school. I finally applied and was successfully offered admission to study Foreign Language [French] at UNN .

Meanwhile, the school fee didn’t come handy and I urgently needed money to beat registration deadline. It got to a point that I had to use the money my sister’s husband gave me to give a business partner to pay my school fee. This caused a huge problem between I, my sister and her husband. I was never trusted with money again.

School fee settled, registration done, however, there was no money for accommodation. I chatted Ihuoma Chizoba Stephen up begging him to allow me stay in their family house while I do house chores for them in exchange. Chizoba declined because I was just an online friend he had neither met nor known much about. Instead, he offered to help me get a female student who could squat me. Unfortunately, he couldn’t get anyone and I was left with only the option of staying with Jonathan, his friend. I agreed to stay with him. Jonathanmary Gande would leave the room for me to sleep in his neighbor’s room every night.

One month into staying with Jonathan, his landlord asked me to pay him 20k to continue staying with him or leave. When the pressure from the landlord became unbearable for me, I left Jonathan’s place for Onyinye’s place. (still another connection from Ihuoma Chizoba Stephen ). Onyinye was neither a student nor a graduate. She was an apprentice who was also struggling to survive. I had no food left. Chizoba would sneak food out of their house to bring for me. I stayed from morning to night without food. My food for a day sometimes was biscuits of N50 unless Chizoba brings food for me. Onyinye was always giving me this pity look and I became uncomfortable with it. So I left Onyinye to go stay with Chimsimdi Ibeneme Chimsimdi Ibeneme, a new friend who accommodated me until I was able to pay my own part the rent.

Life in school was so tough that several times I thought of dropping out. However, I kept telling myself that dropping out is an act of cowardice. Most times, I shed tears when I open my book to study. I suffered severe ulcer because food was always scarce at my end. This took a toll on my concentration,
On the other hand, the pressure to get married kept coming from my mum. Most of the times, I wished I could avoid travelling home after school because each time I travelled, mum will remind me of my mates who are married. Thank God I didn’t succumb to the pressure.

After all the struggles, I graduated with a First Class Honors degree as the best in the Dept of Foreign Languages and second best in the Faculty of Arts, UNN with a CGPA of 4.76 at 28.
To all those that supported me in one way or the other, I say THANK YOU. May this story be an encouragement to those that find themselves in similar situations. Keep up the fight! There’s always light at the end of the tunnel.

FROM A PRIEST TO A HOMELESS BEGGAR

WHAT HAPPENS WHEN HUMANITY DIES