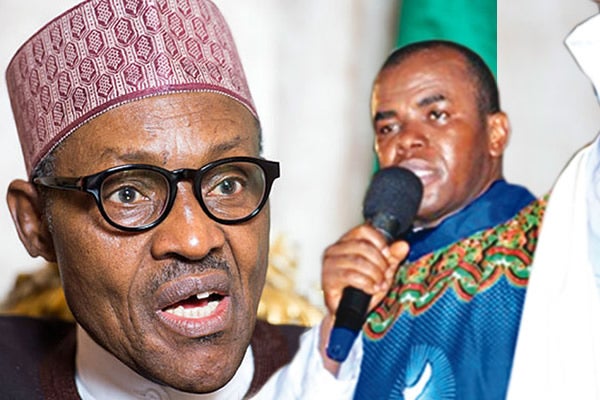 The DSS, brought an official letter to the Spiritual Leader of Adoration Ministry Enugu, Nigeria Rev. Fr. Ejike Mbaka, which was a day after his return to his residence.

For those who may ask, Fr. Mbaka went for a compulsory one month retreat, leaving the Adoration centre shut, as a direction from his Local ordinary. This was because his Diocesan Bishop summoned him for his continuous participation in politics by verbally engaging some politicians, condemning the litany of the poor administrative structure in Nigeria, especially in the aspect of security and unemployment.

Added to that, the members of the adoration ministry, invaded the Bishop’s court, demanding to see their Spiritual Director who was summoned by his Bishop. In an attempt to achieve this, they detonated the house, desecrated the Cathedral Church and left the environment in ruins. The provocation and primarily the irreverence act ignited the Bishop to mandate all priests, religious and faithful of the Catholic Diocese of Enugu to embark on a seven days novena which includes the recitation of the holy rosary and prayer of atonement to the Blessed Sacrament.

However, from the look of things, most of us who have read and commented on this, especially in the area of the DSS asking Fr. Mbaka to come to Abuja for interrogation, may not know the meaning and functions of DSS. And as usual, I will like to inform you briefly of the components of this revered group.

Unlike SSS, which is very common to most of us. The abbreviation, DSS, means Department of State Services (Ndi na agara obodo ozi di oke mkpa) is the motherhouse of State Security Services. Just like each group is involved in one function or the other in the country, the major responsibilities of DSS are for the interest of the people which extends to counter-intelligence, internal security, which the SSS are largely into. Their duties as well associate with counter-terrorism and surveillance with other investigative reporting on issues focusing on crimes and social misdemeanour.

Since we can understand the meaning of DSS and their function within our country, can we now begin to ask that group what they actually came to do in the house of Fr. Mbaka? Can we as well ask them, who sent them and for what reason were they sent? If at all our Constitution is still effective, does the content of their letter have various sections contravened by the Catholic clergy? If their discomfort is coming from how vocal Fr. Mbaka is with matters of politics, insecurity and unemployment, is there a constitutional restriction to what to say and the level to stop speaking in Nigeria? If there are no restrictions to voicing objective opinions for the good of the people, in a democratic society, then, why have the Government asked the DSS to jack Fr. Mbaka to Aso rock?

Majority of what most of you do here is to ask why Fr. Mbaka becoming partisan to Politics, and why he has foolish followers who go everywhere destroying things and praising him for speaking his mind. You do all these, without thinking of what his silence could cause to the populace. Have you ever imagined that there could be security tensions in the adoration ground if he doesn’t speak up? Do you know these political miscreants can sponsor suicide bombers to leave scores of adorers dead, thereby handicapping the voice of Fr. Mbaka or reducing him into tears?

It is unjust to regulate what Fr. Mbaka says, without first accepting the reality of the condition of Nigeria. That you speak with a few rehearsed letters, shouldn’t be the same for anyone. There are many ways people communicate their own feelings, it mustn’t be logically sound, diplomatically oriented and economically rendered. It is simply irrelevant to define others based on your own merits and power, and that’s why the society has been for long exposed to danger and political terrorism. For those who are always using the repeated axiom “religious leaders are not partisan to politics” to quiet the voices of those who would feel uncomfortable with the nature of governance of the country, should know that it is only in Nigeria, that is religiously brainwashed that often post these comments.

Father Robert Morey of Saint Anthony Catholic Church Florence, South Carolina fired the current President of the United States, Joe Biden for his stance on abortion and other biological conflicts that contradicts the doctrines of the Catholic Church. The prelate Robert Barron, who is the auxiliary Bishop of the Archdiocese of Los Angeles, consciously speak about American politics and in many ways struggles to correct the various occasions of misdeeds carried out by the American government. It becomes something different in Nigeria, when a clergy or prelate decides to lend his voice to the discovery of new Nigeria, without being misinterpreted and dragged.

Any time you wish to enjoin into the discussion of politics or speak about sensitive issues concerning the religious leaders and politicians, please, learn to be objective. The more you avoid a proper evaluation by sincerely acknowledging that Nigeria should operate in a standard and at a time these standards begin to decay or compromised, a voice, especially a religious leader should stand up to condemn it and press the neck of the government to a more better direction.  Fr. Mbaka has no influence to how people see God through him, it is your bias mindset and over-sabi, that is always making you feel defeated and screwed.

YOU ARE STILL WORTHY